RISING ABOVE THE REST

SETTING A NEW BENCHMARK IN THE WEST

Rise Projects has sold out of its development at 51-69 Leland Street Penrith, following the transformation of the site into a new thriving architecturally designed industrial precinct.

The 9,394 sqm industrial site, previously owned by PFD Food Services, was vacant and on the market for several years prior to its purchase by Rise Projects; a Sydney based residential and industrial developer in June 2020.

Rise Projects capitalised on the potential of the site and its proximity to regional infrastructure in Western Sydney by sub-dividing the site into three freehold lots that included two freestanding warehouses, and a boutique 18-unit industrial estate at 55 Leland Street.

It established a new benchmark of sales rates for the Western Sydney industrial market.

Rise Projects Director, Daniel Pszczonka said Rise Projects recognised the site’s potential and set out to revitalise the precinct with a unique architectural design and product mix not typically seen in the Western Sydney industrial market.

“Rise Projects identified a gap in demand for higher quality and well-designed industrial units in the industrial market in Western Sydney,” he said.

“While there has been an increase in the design standard of residential and retail property with the growth of Western Sydney, the industrial property market has lagged behind.

“Our aim was to set a new standard in industrial estate design for industrial property in Western Sydney.”

The industrial precinct is set to capitilise on the site’s established position to benefit from future government infrastructure such as the Western Sydney Airport (set to open in late 2026) and road network upgrades, to meet the market demand and current conditions.

Mr Pszczonka added: “We set out to create a boutique industrial precinct that had the look and feel of commercially built architectural buildings seen in commercial business districts that appealed to small to medium companies established in the area, as well as emerging new business that are capitilising on the region’s growth.” 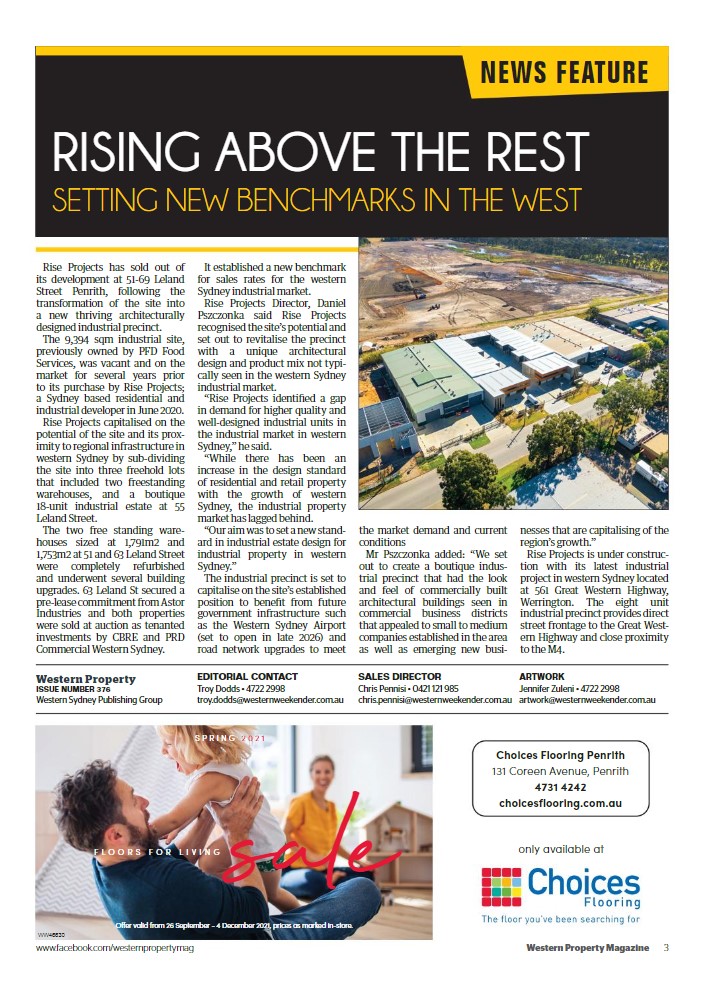